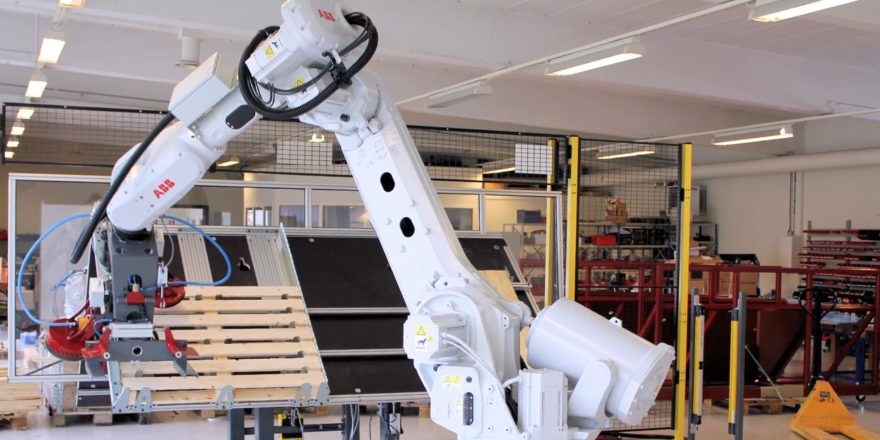 Does the Collaboration of Robots and Pallets Present a Competitive Edge?

However, loading and unloading goods is a repetitive, ergonomically risky, and tedious task. Use of a palletizing robot can help eliminate these factors making the process more efficient and safer. How significant are pallets and can robotic palletizing give your company a competitive edge?

·       History of Pallets and Automation

Pallets have transformed logistics globally since the early 1920s and played a major role in the global economy. They have highly influenced the designs of various products. Product designs have been changed often to ensure that one pallet can accommodate more units.

The history of pallets however especially their origin, why they are critical for logistics, and when they converged with robotic technology remains a mystery to some individuals.

·       Prior to Pallet Popularity, Skids were Used

For years, crates, barrels, and boxes were used to facilitate product shipment. While these are still in use, pallets have overtaken them. Transporting barrels for instance and proceed to stack it or move it across the warehouse is an arduous task.

However, pallets make it easier. Skids which were used before the emergence of pallets date back to ancient Egypt. They resemble pallets but do not have a bottom deck. While they can be dragged around, the bottomless deck makes it hard to lift and stack them. Today, skids are often utilized as free-standing podiums.

The emergence of forklifts coincided with that of pallets. The former offered a transportation solution for heavy items across the warehouse. Pallets made lifting and stacking of high product volumes easy and fast. This is a clear indication that pallets and mechanized technology have collaborated since ancient times.

Manual pallet loading continued into the early 1950s. When mechanical palletizers emerged, they came in handy to take up the tedious, risky, and repetitive loading and unloading work from humans.

Mechanical palletizers were more beneficial since they generated uniform palletizing ensuring that the products remained intact during shipping. However, these machines could only work efficiently when the products were basically identical. While this was suitable for bulk distribution, it was not flexible.

The invention of robotic robots followed later and before long businesses started using them for palletizing. The first palletizing robot was introduced in 1963, two years after the introduction of the first industrial robot. With continued innovations in the robotics industry, palletizing became more flexible. Some of the palletizing advantages include:

Collaborative robots have facilitated the evolution from humans to robots. Unlike conventional palletizing robots which utilized huge industrial robots, collaborative robots can be used within limited spaces by businesses of all sizes.

·       Collaborative Palletizing for Logistics and Distribution

While pallets can now be found everywhere, how businesses handle them is becoming increasingly critical. Entrepreneurs can scale heights by enhancing the de-palletizing and palletizing of products from pallets.

The popularity of delivery supply chains and e-commerce has enhanced robotic packaging and delivery. Small businesses do not have to delay or incur additional costs to accelerate their order fulfillment.

Product distribution can be a determining factor in business scalability. Warehousing can offer a competitive edge to business provided they use it efficiently and adopt robotics as a key gadget to aid the process.

Collaborative palletizing robots can give small businesses a competitive edge. Using them for your de-palletizing and palletizing tasks is easy, thanks to a palletizing wizard which enables users to program the operation with ease.